The ISU World Figure Skating Championships 2017 will join forces with the Finnish National Ballet to demonstrate the beauty of movement that unites both dance and figure skating. Tiina Myllymäki and Michal Krčmář, the charismatic star dancers of the Finnish National Ballet will bring ballet onto the ice for the opening ceremony at the Hartwall Arena.

Their performance has been choreographed by Kenneth Greve, Artistic Director of the Ballet and one of the ambassadors of the event.

- Bringing ballet into the World Figure Skating Championships has been a great experience. It's exciting to combine these two art forms. From a ballet dancer's point of view, one can only admire how a skater moves on the ice - 20 meters in one step - and it's an interesting challenge to figure out how to dance ballet on the ice, Kenneth Greve describes the choreography of the opening number.

The Finnish National Opera and Ballet and the World Figure Skating Championships, which to a large extent share admirers and spectators, will be working together throughout the week.  The Finnish National Opera and Ballet's repertoire during the week includes the boisterous ballet The Seven Brothers and the classic Swan Lake.  Both performances have been marketed internationally.

The theme of the opening ceremony on Wednesday the 29th of March is 'Light'. Star skaters Kiira Korpi and Laura Lepistö, along with nearly 200 figure skaters, will bring light to life on the ice at the Hartwall Arena. The opening ceremony will be followed by the breathtakingly acrobatic pairs short program.

Greve gives away tickets for charity

As an ambassador of the World Figure Skating Championships, Artistic Director of the Ballet Kenneth Greve had the opportunity to give out tickets to a charity. Greve chose to award the tickets to MONIKA – Multicultural Women’s Association, Finland. MONIKA develops and provides specialized services for immigrant women and their children who have been subjected to violence, and acts as an expert and advocate in issues related to ethnic non-discrimination and violence, as well as promotes integration by supporting community activities for immigrants.

The Danish-born Greve praised Finland as a country which has achieved near full equality between men and women and wants to be involved in supporting and helping any efforts to promote gender equality. The theme is also present in the November 2017 premiere of Greve's ballet spectacle The Land of Kalevala.

The tickets were presented to Natalie Gerbert, Director of the Resource Center Monika, and Rakel Santana del Pino of MONIKA.

We want to give the tickets to women who are new to Finland and have just started the integration process. Normally they wouldn't even dream about taking part in a big event like this. This may be a real once-in-a-lifetime opportunity for them to enjoy the atmosphere of the competition and at the same time to feel like they belong, Gerbert said. 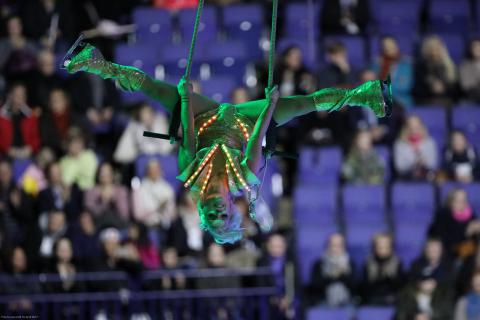